9 tax tips that will save you money

You are here: HomeBlog9 tax tips that will save you money

Since it’s tax season, I thought I would share some of the great tax tips from CBC news:

Tax rules allow you to contribute up to $2,000 more than what you’re eligible to contribute to your RRSP without attracting the usual excess contribution penalty, which is one per cent of the excess amount for every month of the contribution year that it stays in the RRSP.

Even though you can’t deduct the $2,000 over-contribution, it could be residing inside your RRSP for many years, continuing to grow on a tax-deferred basis as long as it’s in the plan. That $2,000 excess contribution can be deducted in a future year when your actual RRSP contribution is less than the maximum you’re allowed to put in.

“Consider using your $2,000 over-contribution when you quit working,” accounting firm Grant Thornton suggests in its tax planning guide. “The earned income you have in your final year of employment will entitle you to an RRSP deduction in the following year.”

Even though the RRSP deadline for 2014 is over, you can still think about contributing through out the year for 2015 taxes.

2. Proceed cautiously if a CRA auditor asks you to sign a waiver.

Under normal circumstances — in other words, no suggestion of outright fraud — the tax department has three years to carry out a reassessment of your tax return.

Sometimes, if the clock is ticking down on that 36-month deadline, a CRA auditor will ask you to sign a waiver to allow the agency to conduct its reassessment after the three years are up. 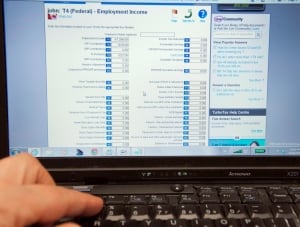 Know the limits of the tax software your’e using and make sure it can handle all the tax scenarios you need it to. (Ryan Remiorz/Canadian Press)

KPMG advises you to consider the request “carefully” and get professional advice. “You are under no obligation to file a waiver simply to make the auditor’s life easier,” it points out in its tax planning guide. “If the three-year reassessment period is about to expire, and the auditor does not have enough information to justify a reassessment, it may be to your advantage not to sign a waiver.”

3. Be sure to take advantage of all income-splitting and pension-sharing opportunities.

Taxpayers can apply to share their Canada Pension Plan (CPP) retirement income with their partners if both are 60 or over. While pension sharing is not considered to be the same as pension income splitting, CPP pension sharing accomplishes much the same thing — putting more income into the hands of the lower-income partner. You can find out more about CPP retirement pension sharing here. The post-retirement CPP benefit, which was introduced in the 2012 tax year, is not eligible for pension sharing.

Income splitting can save thousands of dollars in tax as income is shifted from someone in a higher tax bracket to someone in a lower bracket. Sometimes, splitting can succeed in reducing or eliminating the clawback on Old Age Security payments or the age credit for the higher-income spouse.

As of the 2014 tax year, couples who have at least one child under 18 can effectively transfer up to $50,000 of taxable income to their lower-income partner and claim a non-refundable tax credit of up to $2,000. If you’re going to claim this credit, you cannot also split pension income with your partner.

4. Don’t assume that you don’t need to bother filing a tax return because you have no income.

Some low- or zero-income earners still think there’s no need to file a return. This misunderstanding can cost thousands of dollars in lost benefits and credits like the GST/HST credit and the Canada Child Tax Benefit. More and more benefits are being distributed through the tax system these days. So, if no return is filed, no benefits get sent.

For some benefits, like the Guaranteed Income Supplement and the Working Income Tax Benefit, recipients need to apply every year.

Teenagers who earn a few thousand dollars should also consider filing. That creates RRSP room that can be carried forward indefinitely to use at a time when they will owe tax.

Here’s a possible scenario: You file your return and later discover that you’ve failed to include a T-slip reporting income or a dividend payment. No problem, you think, because you know the slip’s issuer also sends the same information to the Canada Revenue Agency. You think you don’t need to bother forwarding this late slip to the tax department because the CRA will know about it.

That turns out to be a big mistake.

The penalty, which is automatically generated by the CRA’s computers, is 20 per cent of the amount you fail to report in 2014.

6. If you’re emigrating from Canada, don’t collapse your RRSP too early.

If you leave Canada and become a non-resident for tax purposes, it could benefit you to wait until you’re a non-resident before you collapse your RRSP and move the proceeds to wherever you’re moving.

That’s because Canada imposes a withholding tax of just 25 per cent on the proceeds of an RRSP for non-residents. But if you want to wind up your RRSP while you’re still a resident of Canada, KPMG notes that “the proceeds will be taxed at your marginal tax rate, which will be about 45 per cent if you’re in the top tax bracket, depending on the province you live in.”

7. Be sure to transfer any unused credits.

A variety of tax credits can be transferred between spouses. 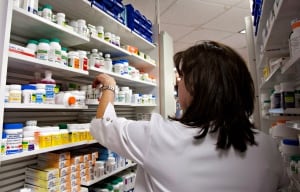 Drug and other medical expenses are some of the most common items overlooked when tallying possible tax credits. (Jacques Boissinot/Canadian Press)

Several credits for students — such as the tuition, education and textbook credits — can be transferred to a spouse, a parent, or even a grandparent once the credits are first used to reduce the student’s tax payable to zero.

The credits can also be carried forward indefinitely so the student can use them later when he or she starts earning money.

Once you tell most of the well-known tax software programs that you’re a student, or a senior, or a parent, or have medical expenses, or have a spouse or equivalent, they’ll prompt you with relevant questions and automatically make sure you end up applying for any relevant credits. You can also avoid those pesky math errors.

Many of these programs will also offer suggestions to transfer credits and optimize deductions between spouses and family members.

They’re also great for performing some of those “what-if” scenarios.

But for those with a more complicated tax life, such as those with rental properties or self-employment income, it may be a good idea to call in a pro.

9. Be sure to claim all eligible medical expenses.

Tax experts say missed medical expenses are one of the most overlooked tax breaks.

Many people don’t bother to add everything up because of the income-related threshold: only expenses that exceed the lesser of $2,171 or three per cent of net income can be claimed.

But what they don’t realize is that there’s a long list of expenses that qualify, so it’s often not too difficult to reach that threshold.

Travel expenses even qualify when people need to go more than 40 kilometres (one way) to get medical treatment that isn’t available closer to home.

Medical expenses can be claimed by either spouse or partner.

And last but not least, don’t forget to check our “Personal Tax Checklist” for the slips that can be claimed under FORMS on our main page.